When we render a list without adding key for each item, we woulld get a warning.

The reason for this is explained pretty nicely on the homepage, but the explanation is conceptual, let’s get hands dirty by looking at how extactly key works internally.

We are already a bit familiar with the code base now, it should not be hard to target the reconcile function for array - reconcileChildrenArray() (source)

if not, you can search on my blog for past entries, or watch my youtube video series

The function body is a bit intimidating, first starting with a long paragraph of comments.

It looks like React is compromising here, NOT doing two ended optimization because we don't have backpointers on fibers.

In the previous entries, we see that for children React holds a linked list of fibers by ‘sibling’ rather than array.

What is two ended optimization? I guess it would be some algorithm which scans from end rather than start. This leads to our first problem.

What kind of changes could happen for a list ?

Suppose we have an array.

After some actions, it becomes a new array. If we find some element at index i is different, there might have many possibilities of modifications.

We can see it is hard to figure out which is the case without extra analysis.

Suppose we have a new array.

How should we transform with minimum cost?

If we care about the minimum moves, it is similar to Levenshtein distance, but after finding the minium moves, we still need to to the transformation.

Take an extream example, what if we reversed the array ?

Since each position is different, the analysing part is going to cost a lot of time to find the optimal moves, which might be better we just replace all of them.

Obviously we can take the dummiest approach - treat all different positions as replace with new items.

This helps understand why there is two ended optimization, think about case like below

It is hard to infer from head, but if we reverse it

It looks much clear now. I guess this is the two-way optimization ? maybe I’m wrong.

In order to understand the code below better, let me explain it a bit.

This means that, once React finds key mismatch, it will try to “move” or “create new fiber”.

Let’s go back to React source code. It starts with a for loop comparing old fibers and new elements.

Oh man, what the heck is going on. Let’s go step by step, I’ve added the comments.

A bit clearer now right ? The key point to understand this piece of code are

Phew, that’s a lot of code, but we managed to cover it. Do you feel more familiar with it now?

Wait, we still need to talk about placeChild().

It is a bit hard to understand the code here. We keep in mind that

I’ve draw an illustration for this, suppose we have order changes like below 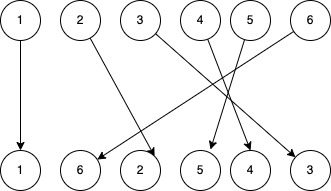 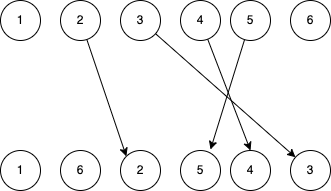 You might wonder why not do the oppsite, like inserting 6 before 2. Remember we are creating a linked list, we cannot know a fiber’s sibling while processing the fiber. That’s why for 6 above, we only set 2 as its sibling when processing 2.

For above case, lastPlacedIndex is

BTW, the code behind Placement is in the commit phase. (source)

It is pretty straightforward.

That’s it. The diffing algorithm is actually not very complex, hope this posts could help you understand.